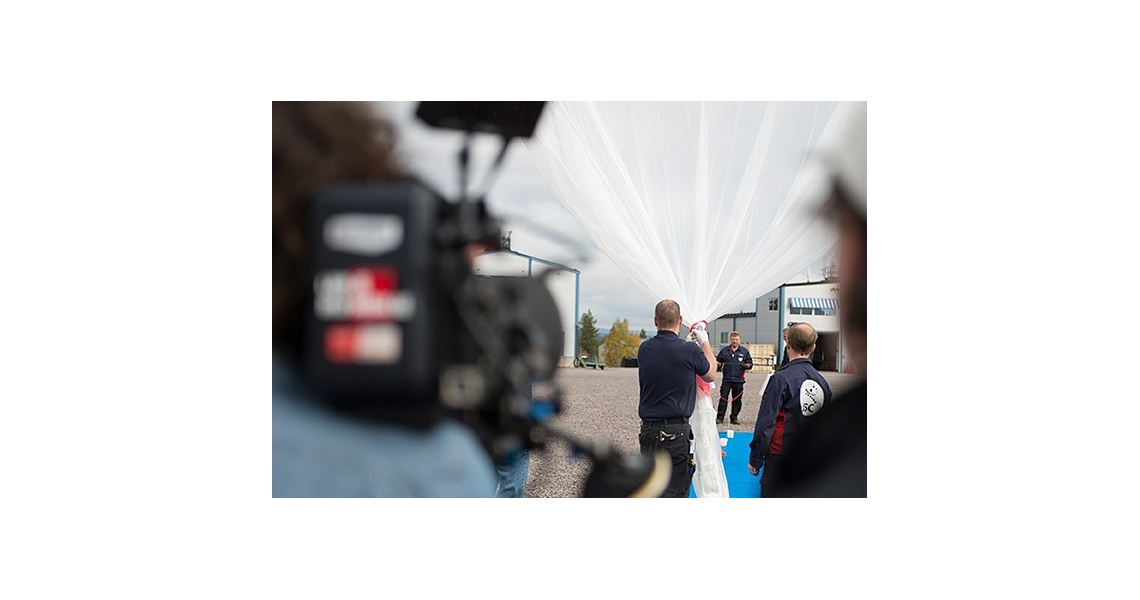 The high-flying film project Tipi in Space began as a crazy idea when film-maker Björn Lindfors accepted a challenge together with Canon to film ateljé Lyktan's Tipi lamp at an altitude of 27,000 metres above the surface of the earth. Tipi would launch into space from the Esrange Space Center in Kiruna in September this year.

There was a tangible air of science fiction before the 500 cubic metre balloon was released. The atmosphere was charged; would the 4 kg payload cope with the stresses of extreme cold, moisture and the thin atmosphere?

The luminaire was rebuilt in the studio Ateljén at ateljé Lyktan to achieve a lighter structure. Cameras and technical equipment had to be slimmed down radically in order to withstand the mission. Nothing was left to chance; for example, a special adhesive was necessary to survive the stresses, and a carbon fibre frame was made for the technology box holding cameras and GPS equipment so as not to exceed weight limits.

Everything appeared to go to plan during the ascent with the helium-filled balloon. Descent was a free-fall with minimal deceleration from a parachute in the extremely thin atmosphere. However, the tower lost contact with the equipment when it had descended to an altitude of 1,000 metres.

A helicopter was called out to search for the equipment and get a fix on it. Because contact had been broken, they had to search at ground level; they were clearly worried that the equipment had crash landed.

The landing had taken place in the stony wilderness close to the Finnish border. Happily, the carbon fibre structure, the three cameras and the luminaire had survived without a scratch.

With the film safely in hand, the whole team set off to study the results. The initial film sequences from a low altitude with the landscape in the background were absolutely fabulous. But when Tipi ascended through the clouds something happened that no one had foreseen, and it was feared that the entire project had come to nothing – ice crystals had formed on the lenses and hardly anything was visible.

At an altitude of 25,000 metres, Tipi could suddenly be seen clearly again. The reason was the inability of the thin air, at a pressure that was almost 30 times lower than on the surface, to hold moisture, so the frost that covered the lens evaporated in an instant.

Björn Lindfors and his film team together with ateljé Lyktan breathed a sigh of relief. The project had been a success.
Tipi in space