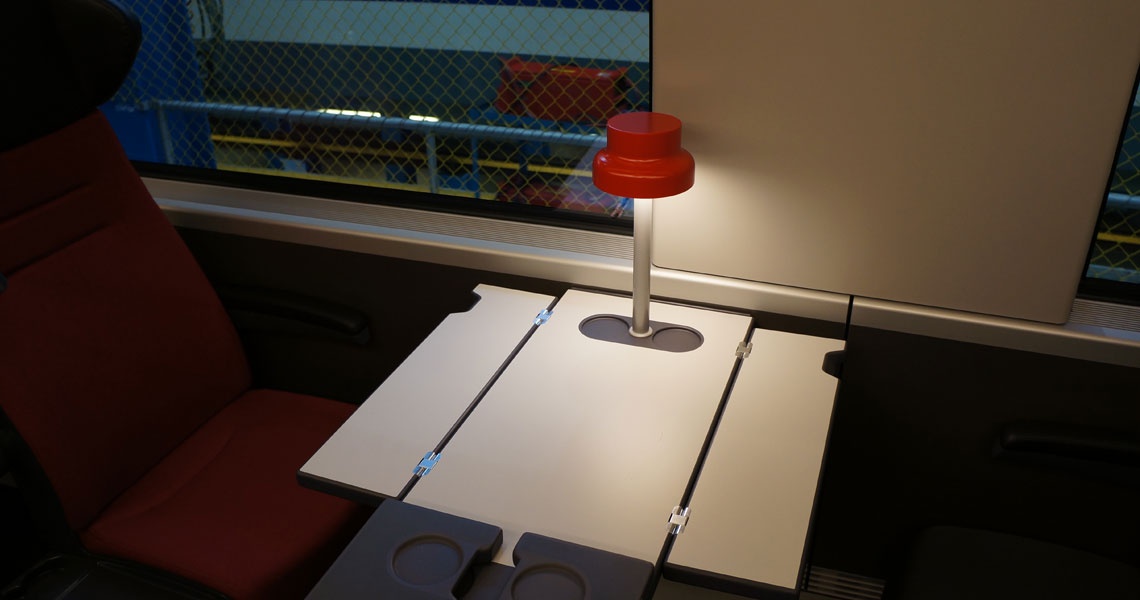 MTR Express is due to launch train services between Gothenburg in the spring of 2015, and will be competing against SJ with fast, safe and climate-friendly trains. The fleet of trains will offer a high level of comfort for travellers, where special attention has been given to the interior design of the train carriages. To this end, lighting company ateljé Lyktan has produced a table lamp version of the design classic ”Bumling” which will be fitted in all carriages.

Bumling was created in 1968 by Swedish designer Anders Pehrson and is one of the most known Swedish lamps. Originally the armature was produced in different sizes, colours and models, but today it is produced as a pendant lamp available in two sizes. A special table lamp is now being produced in cooperation with MTR Express and ateljé Lyktan, with the lampshade in MTR´s corporate red colour.

”Innovation and design are the common denominators for MTR Express and ateljé Lyktan”, says Mikael Hallberg, Commercial Manager for MTR Express. ”Instead of choosing a conventional solution for lighting we wanted to create an environment with that ’extra little something’ and we are very satisfied with the result of our collaboration with ateljé Lyktan.”

The MTR Express climate-friendly express trains are made by Swiss company Stadler. It has been a conscious decision of MTR Express to focus on high-level design solutions for both the interiors and exteriors of the carriages, and also to work together with companies such as ateljé Lyktan.

”Modern technology and energy efficiency are high on the agendas for both our companies when it comes to the products and services we offer”, says ateljé Lyktans MD Richard Wegele. ”We do all we can to contribute to a better environment for our customers and the world we live in. We are proud to have contributed to a part of the travel experience of MTR’s customers.”

The MTR Group, based in Hong Kong, is one of the world’s biggest train companies in the world and currently operates trains on three continents: Asia, Australia and Europe. The Group’s turnover in 2012 was approximately 30 billion SEK with a gross profit of 10 billion SEK. Since November 2009, MTR has been responsible for the maintenance and operation of the Stockholm metro. MTR is now taking on train operator SJ for the main line between Gothenburg and Stockholm as a first step to achieving their ambition of becoming a long-term innovative actor on the train market in Sweden and the Nordics.

ateljé Lyktan is a traditional lighting company that develops, manufactures and sells Swedish-designed lighting armatures for indoor and outdoor use, in both public spaces as well as homes of the more discerning consumer. Ateljé Lycktan’s vision is to deliver the kind of products with innovative solutions, flawless design and modern technology that customers have grown to expect from the company throughout the years. Ateljé Lyktan was founded in 1934 and its headquarters are in Åhus, Skåne. The company’s turnover is approximately 170 Million SEK and the number of employees is around 100. In 1974 ateljé Lyktan became a part of the Fagerhult Group.