When Swedish design took on a more modern expression toward the end of the 1930s, one iconic lamp style from the early 1900s maintained a popular presence. Wax candles and kerosene lamps are often the source of inspiration for chandeliers and bracket lamps when electric luminaires are used for occasional lighting.

Architect, functionalist and ateljé Lyktan’s founder, Hans Bergström, wanted to change the way people see lighting; light’s qualities should be exploited to the full to light up the entire space. He was a lighting designer, long before the term was invented.

In 1935, Hans and Verna Bergström set up business in Åhus, where they established their home and studio. Shortly thereafter they opened “Lyktan”, a store in Kristianstad that acted mainly as a shop window for the general public in the household market and as a showroom for the company. The product range was household lighting and modern handicraft. 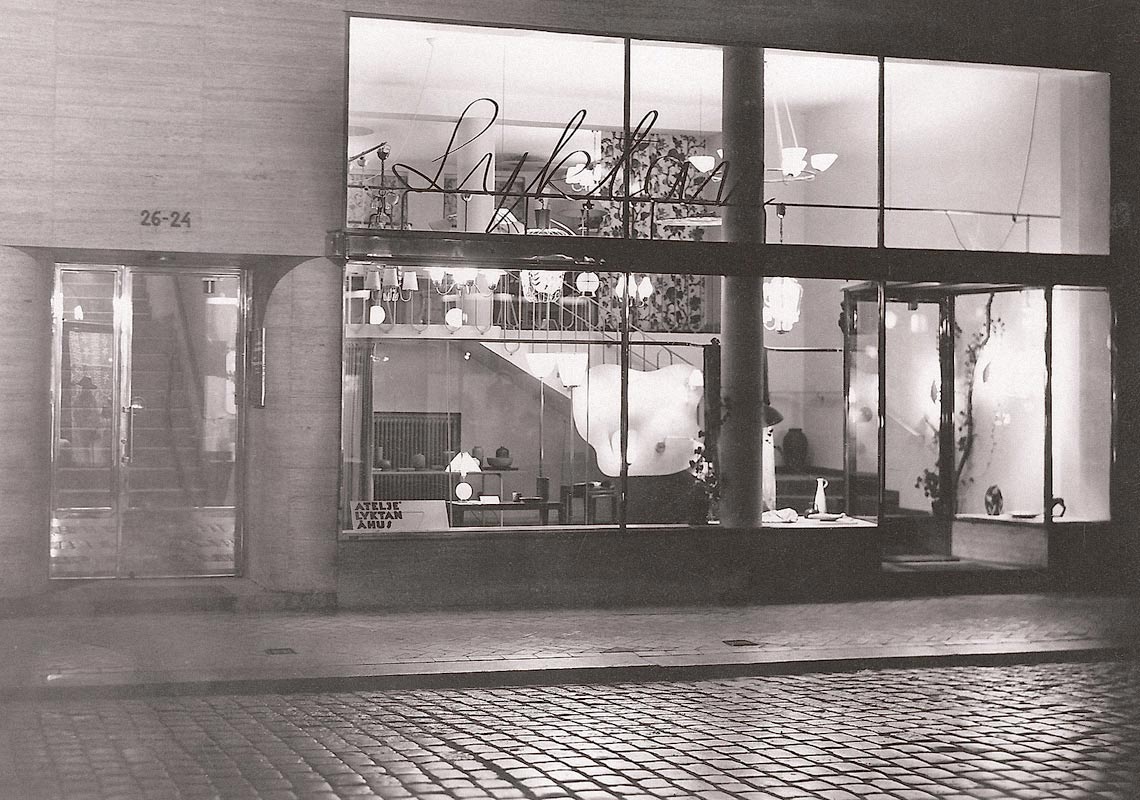 ”Lyktan” – the store on Västra Storgatan, Kristianstad in the beginning of the 1940s. 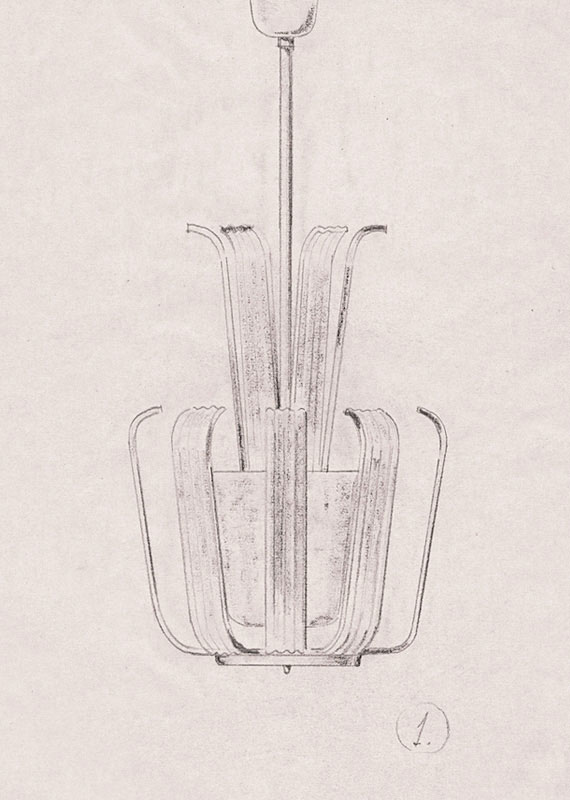 Early drawing from the 1930s by Hans Bergström. Metal and crystal lamp.

The early models, with a few exceptions, were given a numerical designation. It was not until the 1960s that luminaires were given names.

The models shown below are a selection of ateljé Lyktan’s luminaires from the 1930s.

* Gunnar Asplund’s pendant luminaire from 1922 (figure 4 above) is the Nordic region’s oldest mass-produced lamp. The luminaire was designed for the Skandia Cinema in Stockholm, which opened in 1923. The lamp was recovered by ateljé Lyktan via purchase in 1965.

Cage lamps were popular during the 1940s. Fabric or glass lampshades protected the bulb, and motifs from the plant or animal kingdoms were often appliquéd to the cage. 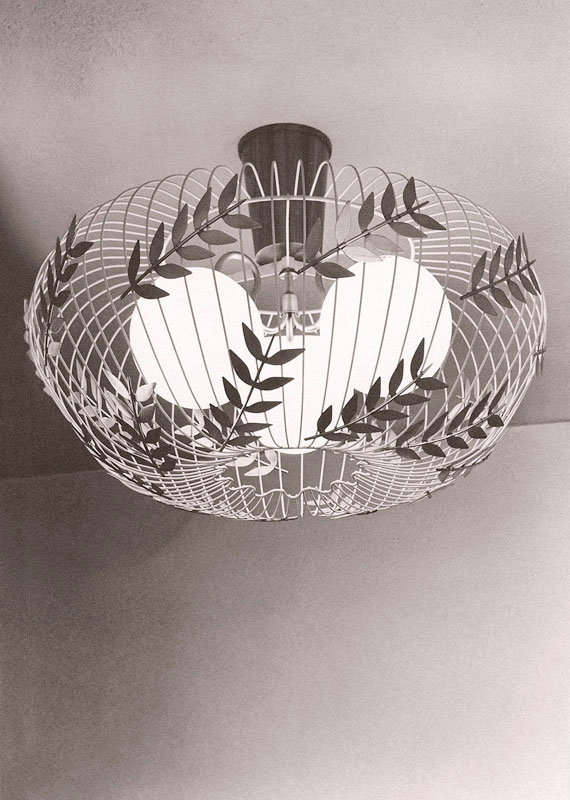 Model no. 5C, a cage lamp by Hans Bergström. 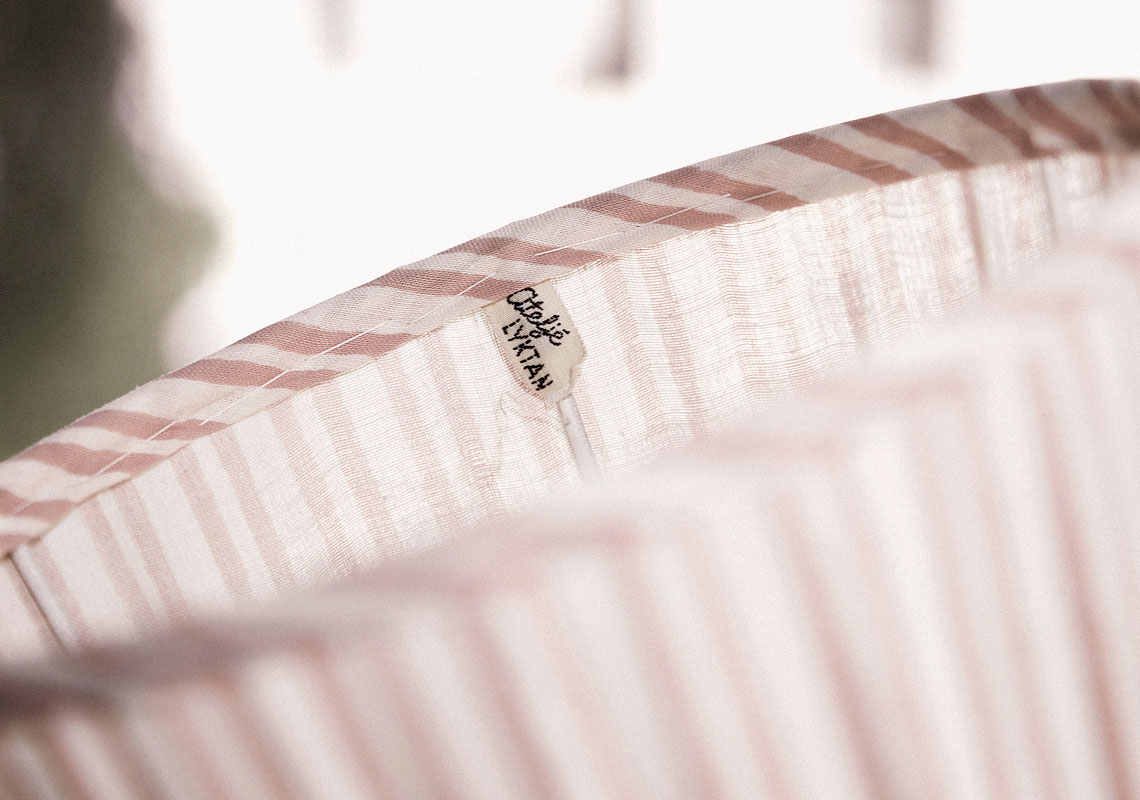 The models shown below are a selection of ateljé Lyktan’s luminaires from the 1940s.

New materials bring completely new opportunities in the 1950s. Plastic made its début and Hans Bergström came across a method for spraying plastic. Because plastic threads were sprayed onto a rotating wire frame previously intended for textiles, lampshade production become significantly faster and more efficient than before. Hans Bergström was granted a patent for the production method. 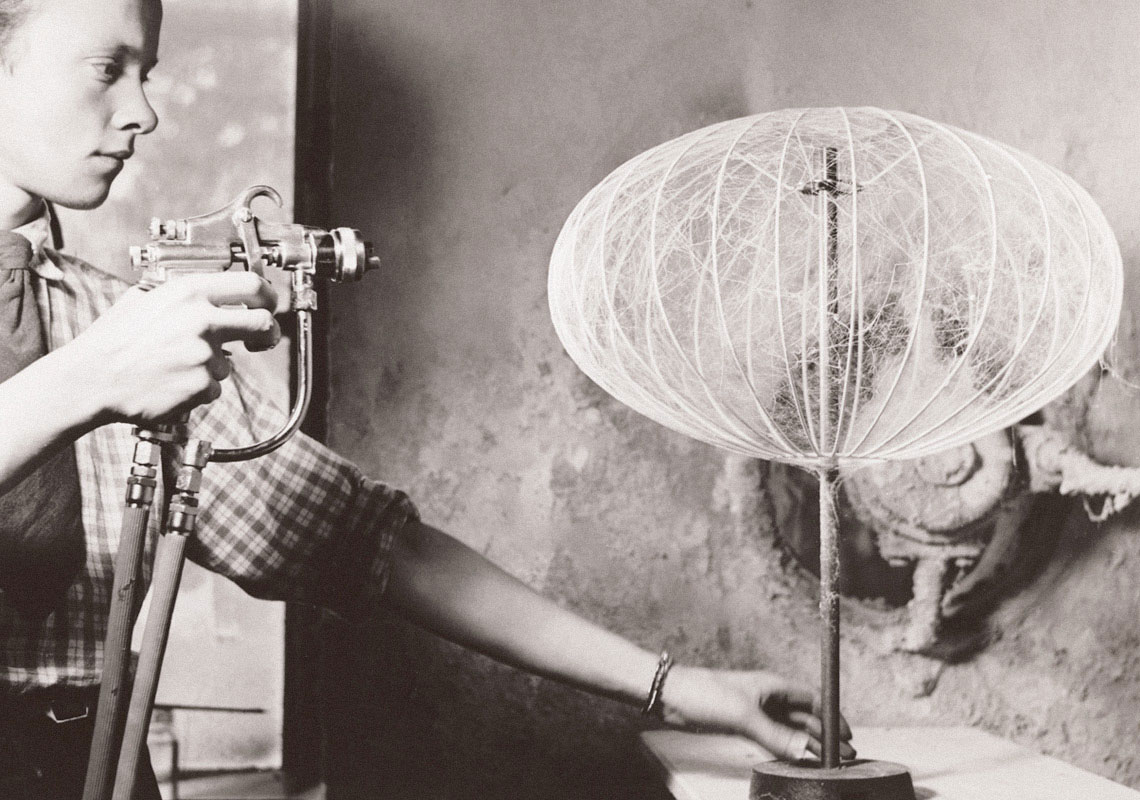 Plastic is sprayed onto a wire frame that gives the luminaire its shape. 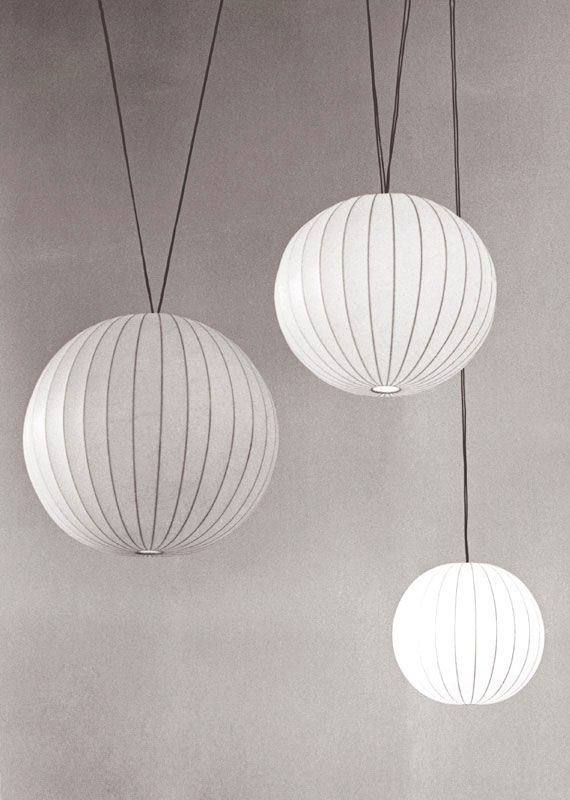 Model 181, aka Struten, is the most stylistically pure, minimalist lamp created by Hans Bergström in his entire career. In 1954, Hans Bergström and ateljé Lyktan were awarded a gold medal for Struten by the Triennale di Milano design and art museum. 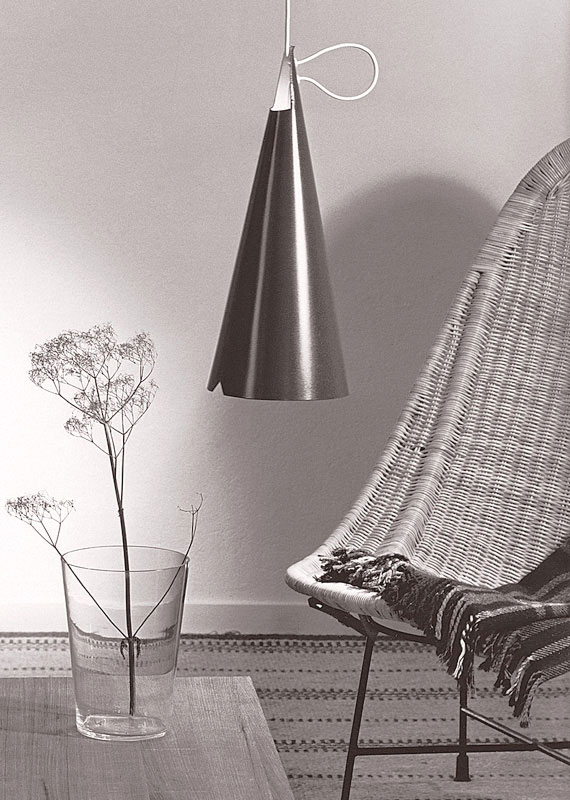 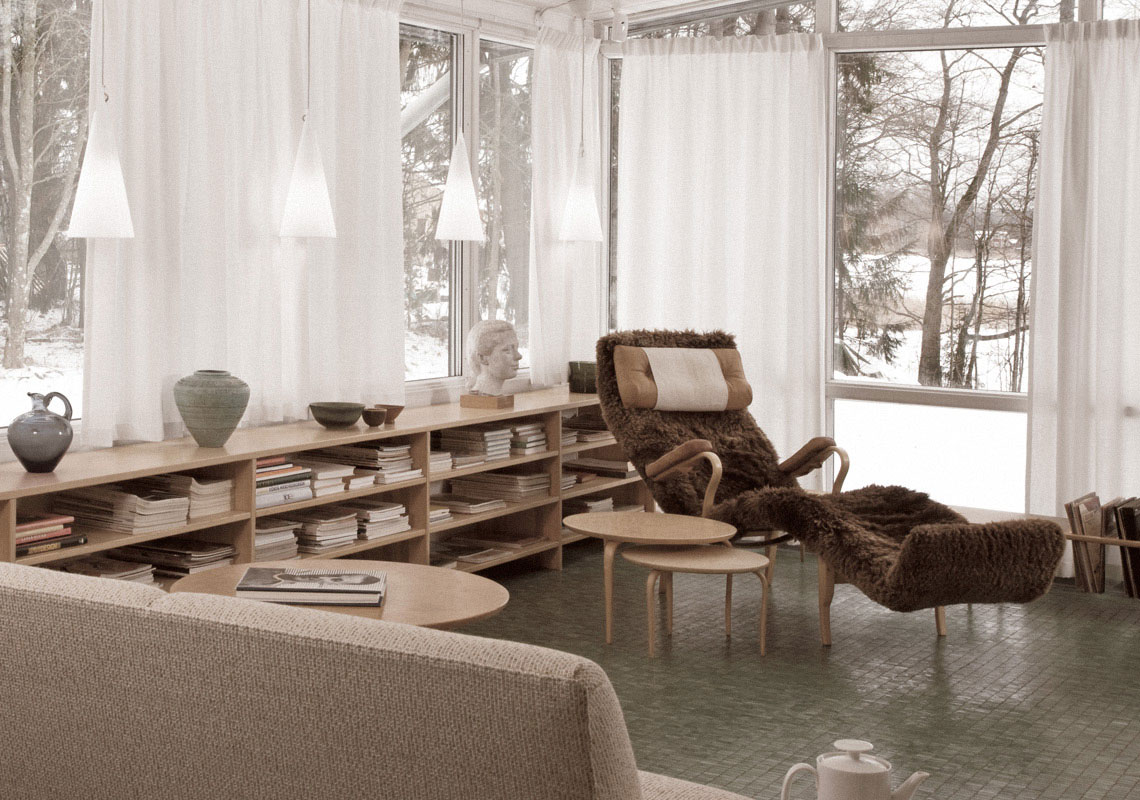 The lamp was a favourite of his friend Bruno Mathsson and is seen here in the furniture designer’s home outside Värnamo. 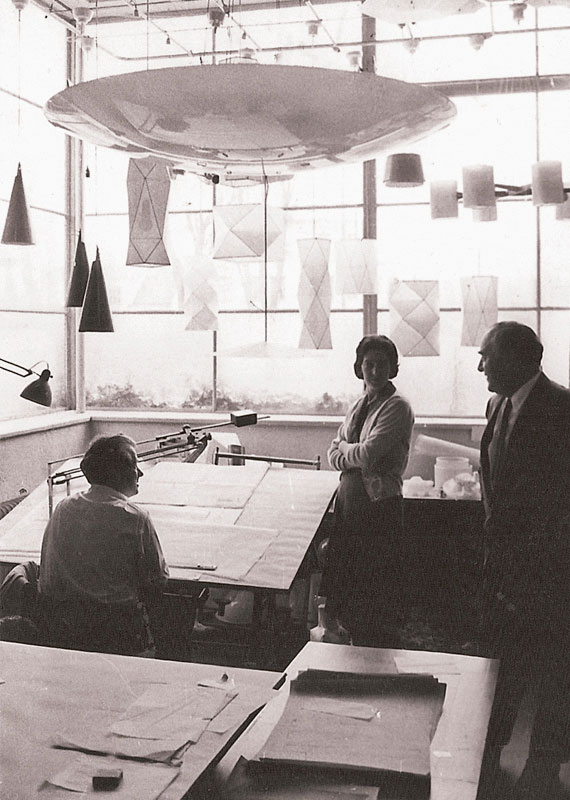 The design office in Åhus during the late 1950s. Among the items seen in the background are Struten and Harlekin.

At the end of the 1950s, Hans Bergström created the Harlekin model following a vision he had of an opera in New York lit by harlequin patterned lamps. Harlekin was launched in 1958 and was a great sales success. The model series comprises a wide range of pendant lamps in different sizes. 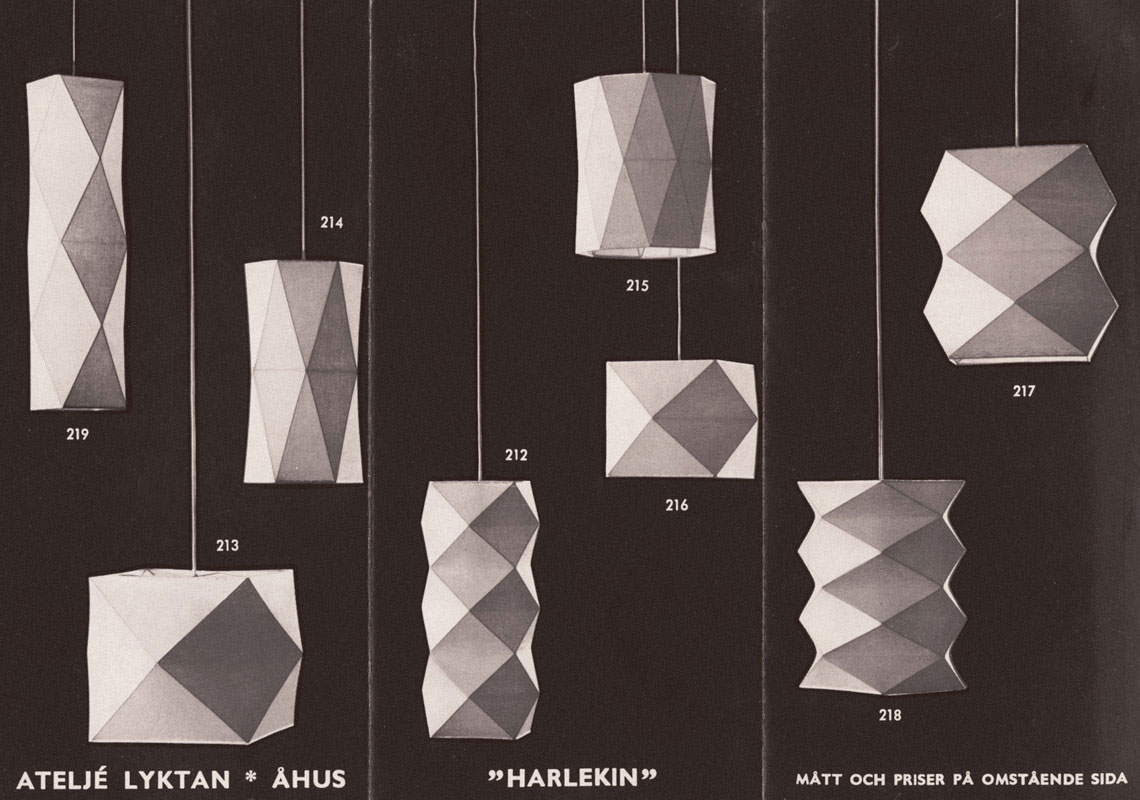 In 1958, the rounded, curved lines of a brass ceiling rose (the cup that conceals the hook and electrical connections on a pendant luminaire) finds a new purpose. Hans Bergström turned the rose upside down and discovered the basic shape for a candleholder base. The candleholder became Model 100L, or Ofir as it is known today.

There can be no doubt that 100L provided the inspiration for Bumling as they undeniably share the same shape. One feature was changed on the candleholder when Bumling arrived 10 years later – the little outward curve at the top of the candleholder base that stabilizes the glass. You can find the same curve on Bumling, but there the detail is just a design feature. 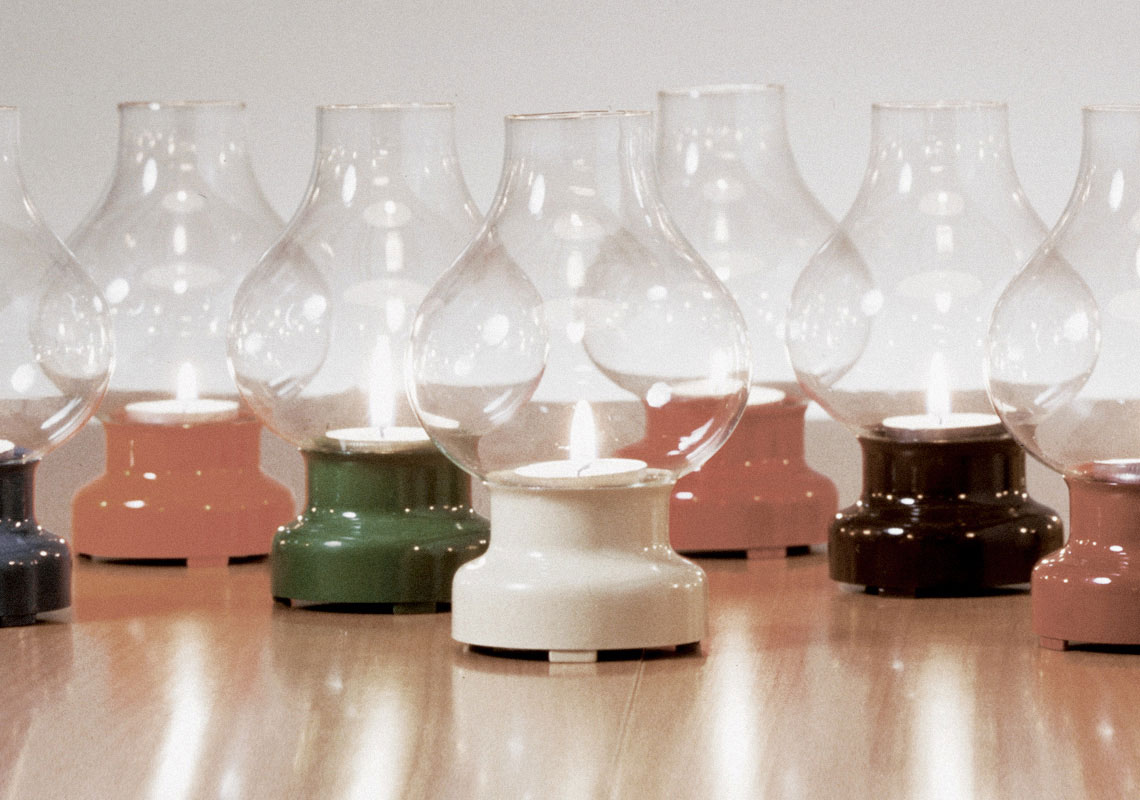 Without a doubt, model 100L was the inspiration 10 years later for Bumling.

The models shown below are a selection of ateljé Lyktan’s luminaires from the 1950s.

Even though a certain amount of mass production was taking place at ateljé Lyktan as the 1960s approached, a great many lamps were still made individually to order. The demand for luminaires burgeoned and the company needed to modernize its means of production.

In the beginning of the 1960s, Philips’ Design Manager Anders Pehrson, was offered the chance to take over the entire Åhus operation. His eye for design and business came to be crucial for ateljé Lyktan’s future when he decided to invest in the mass production of the most bankable models. He also created and developed one of the biggest Swedish design classics and lighting successes ever – Bumling. 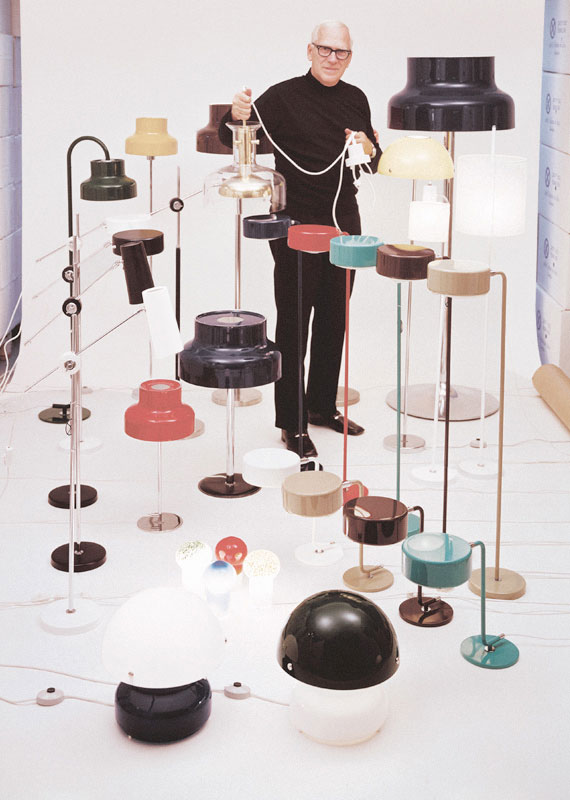 Gunnar Asplund
Gunnar Asplund was one of Sweden’s most talked-about architects in international circles. He was also a designer and many of his interior furnishings and items of furniture remain popular. The Asplund lamp (1922) was recovered by ateljé Lyktan in 1965.

For the latest news, stories and inspiration.